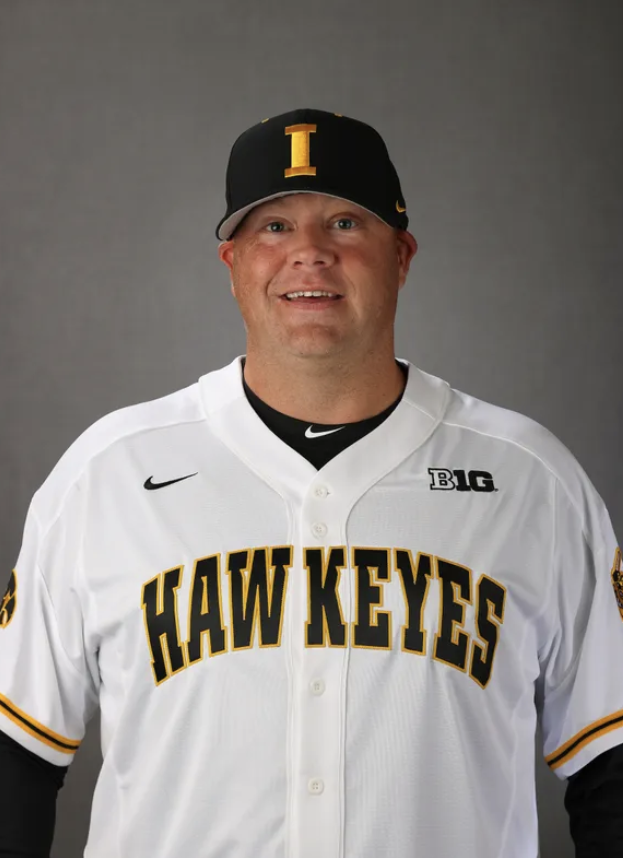 David Pearson is in his second season as a volunteer assistant coach with the University of Iowa baseball program.  Pearson serves as the Hawkeyes’ hitting coach.

During his first season in Iowa City, the Hawkeyes won 36 games — the eighth most wins in a single season in program history — and finished tied for second in the Big Ten, posting a 17-7 overall record.  Iowa won 20 of 27, 23 of 32 and 30 of 42 games down the stretch, including winning six straight series to close out the regular season to put itself in NCAA Regional conversation at season’s end.  The Hawkeyes qualified for the Big Ten Tournament and advanced to the tournament semifinals for the first time since 2017.

Iowa won with a pitching staff that was among the nation’s best, as it ranked second nationally in hits allowed per nine innings (6.88), third in strikeouts per nine innings (11.2), fourth in ERA (3.72) and 11th in WHIP (1.29).  The staff led the Big Ten in virtually every pitching category.

The coaching staff transformed South Dakota State transfer Adam Mazur into the Big Ten Pitcher of the Year — the second straight Hawkeye to earn the honor.  Mazur earned Collegiate Baseball Second-Team All-America and ABCA/Rawlings Third-Team All-America honors, while earning first-team all-region and first-team All-Big Ten distinction after going 7-3 with a 3.07 ERA with 98 strikeouts over 93 2/3 innings.  Mazur had nine quality starts during the season.

Mazur led a quartet of Hawkeyes selected in the 2022 MLB Draft, as he was drafted in the second round (53rd pick) by the San Diego Padres.  He was the program’s highest draft pick since 1990.  The program also had two additional top 10 round picks — the three top 10 rounders are the most in school history — in Peyton Williams (Seventh Round, Toronto) and Dylan Nedved (Ninth Round, San Diego), while Duncan Davitt was chosen in the 18th Round by Tampa Bay.  Ben Beutel also signed as an undrafted free agent with the Chicago White Sox.

The Hawkeyes’ roster also boasted the Big Ten Freshman of the Year as Keaton Anthony became the second player in program history to earn the distinction.   The Georgia native also garnered Freshman All-America honors from Collegiate Baseball and the NCBWA (and second-team All-Big Ten) after hitting .361 with 22 doubles, 14 home runs, 55 RBIs and 46 runs scored.   The 14 home runs were the most by a Hawkeye freshman since 1999.

Iowa had a total of four All-Big Ten selections and four ABCA/Rawlings All-Region honorees in 2022.  Peyton Williams (.355/17 2B, 13 HR, 55 R, 41 RBIs) earned first-team All-Big Ten and second-team all-region honors, while senior reliever Ben Beutel earned second-team honors by both outlets after going 3-0 with a 1.47 ERA with four saves in 29 appearances.  Beutel picked off nine batters during the year en route to being the second Hawkeye all-time to earn a Rawlings Gold Glove for being the best defensive pitcher in Division I college baseball.

Redshirt sophomore Kyle Huckstorf had a game for the ages against Indiana on May 19.  The outfielder set Big Ten and Iowa records for hits and RBIs, finishing 6-for-7 with three home runs, 12 RBIs and four runs scored.  Huckstorf hit two three-run home runs in a 10-run fourth inning, connected on a grand slam in the fifth and his two-run eighth inning single gave him the Big Ten RBI and hits record.  Huckstorf earned Collegiate Baseball National Player of the Week, Dick Howser Trophy National Co-Hitter of the Week and Big Ten Player of the Week honors for his efforts.

Pearson joined the program following a two-year run as an assistant coach at North Dakota State – his second stint with the Bison. He also served as head coach at Des Moines Area Community College (DMACC) from 2016-19.

During the 2021 season, Pearson helped the Bison to a school record 42 victories, as the team went 42-19 on its way to a Summit League Tournament title and NCAA Regional berth. NDSU won its first NCAA Regional game – a 6-1 win over Nevada – to tally its first NCAA win of the Division I era.

Pearson spent 10 years in Fargo from 2007-2016 where he ended his run as the associate head coach for two seasons. He helped the Bison to their first-ever Summit League Tournament championship and an NCAA Division I tournament berth in 2014. He also assisted the Bison to three Summit League championship game appearances and five league tournament berths in the final six seasons.

Pearson was part of both of North Dakota State’s NCAA Regional berths and both of the program’s 40-win seasons.

In his 10 years at NDSU, Pearson helped the Bison establish several offensive season records, including most triples, hits and sacrifice hits in 2012 and most times hit by pitch in 2010, along with defensive season records for fielding percentage, putouts, assists and chances during the 2012 campaign.

During his head coaching stint at DMACC, Pearson led the Bears to a 38-17 record and the Iowa Community College Athletic Conference title in 2018. He was named the ICCAC Coach of the Year. In three seasons as head coach, DMACC averaged 32 wins per season and the team appeared in the 2018 NJCAA Region XI Tournament title game.

Pearson’s coaching career began as an assistant on the 2003 state tournament team at May-Port-CG High School.

As a player, Pearson was a two-time all-conference infielder in junior college at Minot State-Bottineau, where he was a member of the 2000 team that won the Mon-Dak title. He went on to play two seasons at Mayville State and was a member of two Region 3 championship teams and he played in the 2002 NAIA World Series. Pearson was inducted into the Dakota College at Bottineau Hall of Fame in 2015.

Pearson graduated from Mayville State in 2003 with a bachelor’s degree in business education. He and his wife, Keleigh have two children, Carter and Berkley.